The best selection of top mexican recipes for you to cook at home. 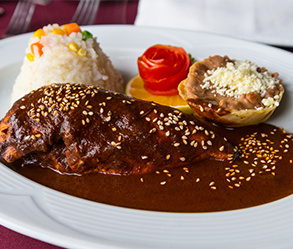 Mole typically contains a mixture of chillies, nuts, seeds, and vegetables. They sometimes include unsweetened chocolate, tomatoes, and raisins. Avocado leaves, epazote, and various spices might be used as well. Traditionally it was served with turkey, which is a bird native to Mexico but is now often substituted by the simpler chicken. Traditional mole can take hours if not days to prepare, luckily most homes today opt to buy it in a concentrated paste, or powder, that can you can find with us.

In today’s recipe, we are using Doña Maria mole one of the most popular brands because of its rich, signature red colour, and pleasant peanut/chocolate flavour that adds just the right amount of spice to chicken. However, on the MexGrocer website, there are several different types and brands to choose from, I guarantee that you’re going to want to try all of them after this initiation.


* You don’t have to make a whole chicken if that is too much. Feel free to use legs or chicken breast and stock cubes with hot water. Just make sure to adjust the amount of mole paste you use accordingly

Want to know more about mole?
There are many myths surrounding mole and its creation. Was it first conceived through the stroke of genius of one imaginative nun named Sor Andrea de la Asunción in the Convent of Santa Rosa located in the region of Puebla? Or was it born out of the terror of a desperate friar named Pascual Bailón, who had the stressful task of having to cook for the Viceregal and Bishop of Puebla (Don Juan de Palafox)? Or is it a dish that had been made well before the arrival of the Spanish dating it back to prehispanic times. In the case of mole, it’s kind of a combination of all three. In Nahuatl (the Aztec language) the word mulli is used to describe a salsa of which there were several variations that are clearly the origin of what is now commonly known as mole. For example, a chilcuzmulli xitomayo, is a nahuatl name for a sauce made of yellow chillies and tomato, whereas izmiquilmolli is made with green chillies. During the three centuries of colonial Mexico, the sauces known as mulli began to have other ingredients from different parts of the Spanish Empire added to them. Ingredients such as black pepper, nutmeg, ginger and cinnamon were mixed with the more traditional mulli ingredients, like fresh and dried chilli peppers, tomatoes, achiote and squash seeds. This mixture of local and far off ingredients from the vast corners of the world came together to create the mole we know and love today, a sweet, nutty, roasted and slightly bitter smooth sauce. There are 5 main types of mole: Mole Poblano (from Puebla), Mole de Oaxaca (from Oaxaca), Mole de Caderas (made with goat meat), Tlilmole (from Tlaxcala) and Mole de Pipían (which comes in different colours depending on the chillies used).

This recipe was written by Hannah Thorne in collaboration with MexGrocer. Hannah is a Latin American recipe developer living in London. Check out her website CIBUS, and follow @cibuskitchen on Instagram for recipes and updates.
VIEW ALL TOP MEXICAN RECIPES
VIEW ALL MEXGROCER RECIPES